Currently only amateur astronomers observe Mars in a global and continuous way when the planet is closer to the Earth (“opposition”). A part of these enthusiasts has been aggregated to the monitoring program initiated by Jean Lilensten, research director at the Institute of Planetology and Astrophysics of Grenoble (IPAG), and Jean-Luc Dauvergne, amateur astronomer. In 2018, they formed a network of ten observers spread over all continents.

The atmosphere of Mars is characterized by a complex seasonal cycle of cloud formation related to the condensation of CO2 and water, and the lifting of surface dust. Despite decades of observations by orbital probes, images of a given cloud obtained from Mars orbit are generally limited in terms of temporal sampling and spatial coverage. In parallel, ground-based telescopic observations have the potential to provide a global and dynamic view of some large-scale clouds.

On November 17, 2020, French scientists Emmanuel Beaudoin, researcher at the Laboratoire de Physique des Solides, and Christophe Pellier (Société Astronomique de France) detected and photographed, during three hours, a huge cloud structure emerging from the night. This discovery is an illustration of serendipity because the initial goal of the program was to detect polar auroras. What was observed here is atypical for two reasons: the cloud complex is gigantic, with an extent of 3000 km, and is located at 92 km altitude, at the doors of the interplanetary void (Figure). The cloud diffuses light at all visible wavelengths, with a maximum in the red, which suggests that it is composed of micrometric particles that may be ice crystals (H2O ou CO2). Water ice clouds have already been observed at this altitude and season, but with smaller size crystals. The observed particle size is compatible with the CO2 hypothesis but the observation season is atypical. It is therefore not possible to decide between these two hypotheses. At the same time on November 17, 2020, a dust storm was developing on Mars. The authors question the possibility that this activity has participated in the formation of this atypical cloud structure. This work is published in Astronomy & Astrophysics.

Figure. Temporal evolution of the cloud system from 20H25 to 21H26 UT through the red (R), green (G) or blue (B) filter. The planetary disk is overexposed to better show the phenomenon © Emmanuel Beaudoin

Scientific news from the CNRS Institute for Earth Sciences and Astronomy 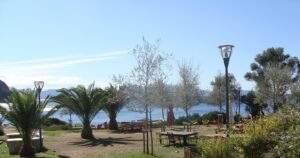