Chocolate mousse on a spoon, shaving foam on the skin, sea foam on the beach, all situations in which a foam slips or rubs on a rough surface. A question that has remained unresolved until now was to understand what was the minimum roughness size required to prevent a foam from slipping.

This was the purpose of Manon Marchand’s thesis, which was recently awarded the 2021 thesis prize of the “Physics of Waves and Matter” (PhOM) thematic axis by the Graduate School of Physics of the Université Paris Saclay. The thesis was realized at Laboratoire de Physique des Solides under the supervision of François Boulogne and Emmanuelle Rio.

The subject was to study the friction of liquid foams on rough surfaces. To do so, Manon made foams with all bubbles of the same size while precisely controlling the amount of water in these different foams. From mechanical measurements, she revealed the different friction regimes of a foam on a textured surface and highlighted that an important parameter is the ratio between the sizes of the asperities and the Plateau borders, the junction between the soap films. This research could have many practical applications, including increasing the mouthfeel of certain food preparations.

The “award ceremony” will take place at the next PhOM Annual Day, which will be held in the spring of 2022. 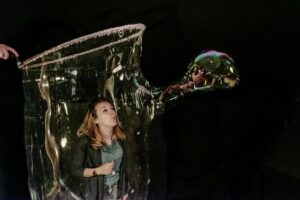 A joint laboratory of the CNRS and the University Paris-Sud. We work in many areas of solid state physics, from nanoscience to hard and soft condensed matter.